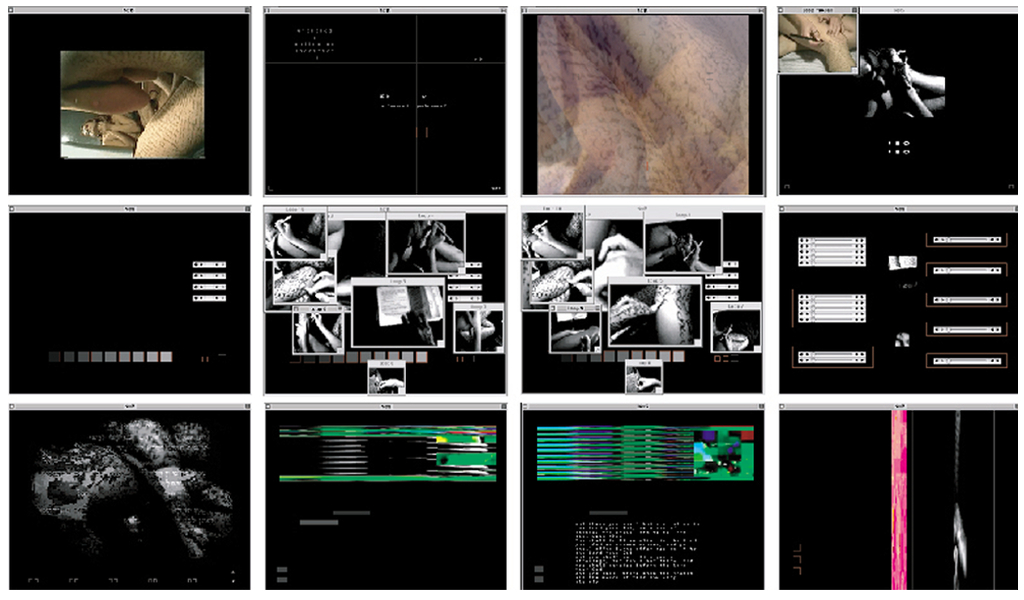 Untitled (Notion of Sacrifice II), comprises photographs, video and CD-ROM documenting a performance that consisted of writings on my body.  I made this performance twice. The first time was in October 8, 2000, the night of Yom Kippur. The texts I wrote were passages and prayers used for Yom Kippur from the Machzor, a Jewish prayer book. Another person took photographs and filmed the first performance. The second time I performed the action was in order to make a more subjective documentation of it. I recorded the performance with a quick cam attached to my forehead. Then the image filmed and photographed is the partial image of the book and my body.
In this work not only the idea of sacrifice is fundamental (as an offering), but the idea of parallelism between written text and sound. Written text is on the exterior of my body, while sound is on its interior. The written words are the body of sounds, written on my body. The idea was to symbolically annul my body to convert it to the body of word/sound. Therefore the ultimate idea was the dissolution of myself to become sound.

The CD-ROM investigates different relationships between sound and images of the performance. By its inherent interactivity the CD-ROM shifts the focus of my work from my own experience to that of the viewer, who is convoked to create new sound possibilities. Sounds are elaborated digitally from images of the performance and the sound of my voice reading the prayers written on my body.